This year is the 45th anniversary of the Voting Rights Act that paved the path for diverse citizens who had been denied the right to register to vote to elect African Americans, Latinos and others from their own communities; 100 years after the end of the Civil War ended and the 15th Amendment reaffirmed those rights.

The 1965 Voting Rights Act brought federal examiners to override southern officials who blocked African-American citizens’ right to register. On August 6th, years of brave persistent applicants and protesters, reports of civil rights activists’ jailing, beating and harassment, and Department of Justice lawsuits combined to pressure Congress to enact and President Johnson to sign this vital legislation. The right to vote free of barriers, whether physical, linguistic or prejudicial is preserved through the 1965 VRA.

When I read that fewer than 50% of eligible voters are registered and that only half of those registered vote in any given election, it makes me wonder if these citizens have any idea of the sacrifices made on their behalf? The Voting Rights Act was not just about the Deep South. The 1965 VRA is a piece of living history. You can preserve our environment, improve our schools, protect your rights and make sure that a full spectrum of citizen voices is heard loud and clear.  Register to vote; then vote in each and every election, not only those where you favor a candidate or position. It’s not too late to become part of civil rights history. 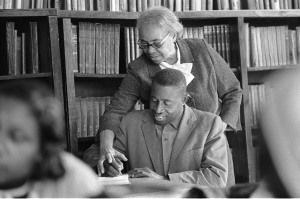 Learning how to vote: the next step to equal opportunity

View another article and more photos at The Santa Cruz Sentinel