In 1065 I worked with SCLC and SNCC on a summer voter registration project in Wilcox County. This is an original letter from that time, reflecting the typical naivete of a young white girl from the North. Negro was a term of respect at that time. Here is a photo of me with two of my three sisters Cindy and Alberta in our family side yard the month before I went South. We were a rural working class family. 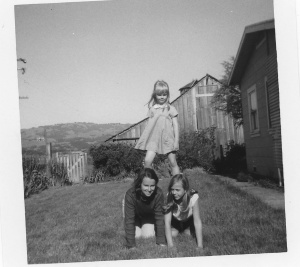 I am sorry I haven’t been able to get in touch sooner. It was good to hear your voices Sunday nite. Do you mind if I call occasionally? I just sent off my first detailed report today so you should receive it in a week or so. I’ll try not to repeat myself.

I have only received one letter since I got here & that was from Mom. No other mail has reached me. Has anything else been sent yet? While I’m thinking of it – let me know if this letter appears to have been opened. I will tape it shut.

I was in Good Samaritan Hospital in Selma for a few days with a touch of pneumonia. Don’t worry about it. I am fine now & they have me doing secretarial work indoors until I get my strength back.

Please send vitamin pills. We are having a boycott on all white stores that won’t hire Negroes & there isn’t a drugstore between here and Montgomery that will serve us. I am doing the cooking here at the Academy. I could use some recipes. Maybe Dolores could copy down some inexpensive, good-size group recipes for me.

I don’t feel badly about accepting gifts & I wish you wouldn’t assume responsibility of refusing them for me. I’m trying to get $ for a scholarship fund for civil rights workers, too. If you are embarrassed to have people involved in my financial affairs, please have them write directly to me & then you needn’t be concerned about it.

It’s difficult to tell you the truth about things around here without scaring you unnecessarily. The whites are really trying to scare us off & they are doing everything they can to keep us from registering voters. But, they aren’t going to kill us. If we refuse to be scared then they will just have to give in.

They’ve jailed 7 people so far but all were treated well & released promptly. One boy has been beaten and that was by a white man (not police).

We got 150 people registered Monday so I think it’s well worth our efforts.

There is a lot of tension among people here – trying to be brave when they are living in constant fear. I refuse to be afraid all the time. If I am, then the enemy wins. If I am not afraid – then I win the victory. After all, what can they do to me?

Thank God things aren’t this bad in the rest of the South. Alabama is the most racist state in the union – I don’t care what you read in the papers. Before we got here, Sheriff Jenkins distributed firearms to all the white folks and told them not to hesitate to use them. This is a backwards county. There are no industries or big businesses or healthy farms. The irony of it is that the land is beautiful & fertile. If black & white would just work together, I know they could make Wilcox a rich county.

My main function right now has been that of mother  – even though most of the people here are years older than me. I just try to make them more comfortable – physically & mentally.

I’m getting a [black] Southern accent even though I fight it. It sounds funny.

I think of you all & pray for you. When I was in the hospital, I kept dreaming I saw little Cindy [my youngest sister] walking in my room with a bouquet of flowers. She was so beautiful it made me cry.

Please don’t be alarmed at how or what I write. Things are so different here & I’m just trying to tell you.

First arrests: We had stepped into a pattern of entrenched racial tension that had been going on for over a century and had increased dramatically in the months before we arrived ever since Martin Luther King Jr. appeared in person to lead a march to the courthouse in Camden right before Bloody Sunday in March 1965. If some voters managed to get registered, those who helped them would be arrested, shot at, beaten immediately. They wanted it to be crystal clear that every move African-Americans made towards equal rights put all our lives in danger. My comment “they were treated well and released promptly” was uninformed and part of early instruction that we should try to downplay reports of violence. When I was arrested myself, I got to witness this “good treatment”.

For all except the wealthy in those days, long distance was considered a real luxury and most people only called out of state on Sunday evenings when rates were lower. My particular family was proud of being poor but independent and was aghast at their fundraising daughter. I saw myself as part of a larger collective, something much bigger than my family and had no problem raising money for a good cause. They were embarrassed by my appeals for funds to various individuals and church groups who had helped me pay for my trip. Other white civil rights workers didn’t know what I meant when I talked about raising money for my trip so I imagine they had jobs or parents who helped. I had big ideas for getting scholarships for our local high school graduate activists so that they could go to Selma or Montgomery for college, but I didn’t get far with that concept when all around me were dire daily needs. Still, I did collect and re-distribute money all summer, either by buying food and feeding people or by giving black and white students small loans that they never needed to pay back. I wrote to people in California and they sent me more money. That was really the beginning of my later career as a nonprofit organization fundraiser.