As a freshman at San Francisco State in 1965, I joined the Summer Conference on Community Organizing and Political Education (SCOPE). The project was the brainchild of Reverend Hosea Williams, one of Martin Luther King, Jr.’s top aides and a chief organizer of the recent Selma to Montgomery march, as well as the 1963 March on Washington. In anticipation of the imminent passage of the 1965 Voting Rights Act, SCOPE’s mission was to recruit and train college students to work with local leaders to identify, educate and register as many disenfranchised Black voters as possible. After an intensive five-day orientation in Atlanta, I was assigned to rural Wilcox County, Alabama, where the judge, sheriff and mayor were outspoken about belief in segregation and racism was public policy. The Ku Klux Klan was highly active, and the white community had been silent during months of police tear-gassings, beatings, and arrests of local Black demonstrators (mostly young students from Camden Academy) before we arrived. They were fighting nonviolently for a good education, voting rights and jobs, none of which were available to Black residents. Their struggle quickly became ours as we jumped into the dangerous now nearly forgotten Freedom Summer of 1965.
Excerpt from This Bright Light of Ours on my first night in Wilcox County:
It was after 4:00 a.m. when we heard truck doors slam as booted feet quickly surrounded Antioch Baptist Church where our exhausted group of newly trained civil rights recruits was trying to get some sleep. “Get down and stay down till I say,” shouted our leader Major Johns. Then there were shots—unmistakable, shotgun shots. I moved closer to Bob, a fellow civil rights field worker I had met only ten hours earlier. “They won’t kill us tonight,” he whispered as I shivered in fear. “Not likely anyway. I’ve only been cattle prodded once and never been arrested yet. Welcome to Wilcox County, that’s all.” I held my breath and prayed.
© All rights reserved by Maria Gitin (formerly Joyce Brians) 2012. This Bright Light of Ours publication announcement forthcoming. 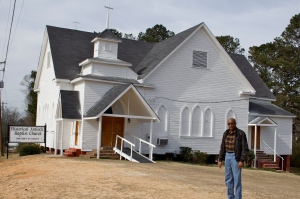 For Maria’s first meeting with John Matthews in 1965 see: https://thislittlelight1965.wordpress.com/2010/04/05/civil-rights-worker-student-reunion-in-corn-field/