From a note in SCOPE files 50 years ago today: Five carloads of SCOPE workers shot at by white men after being stopped by police. They were trying to leave town to avoid wrath of whites after Gov. Wallace rally in Camden attended by thousands.

My own memories of that night: Our leaders warned us that George Wallace, the governor of Alabama, infamous for his slogan “Segregation now, segregation tomorrow, and segregation forever,” was coming to Camden to rally the already hostile whites. He planned to speak from a platform in front of the courthouse where our recruits attempted to register. Major Johns told us to get out of town, and so most of our workers left for outlying communities, but I stayed behind at Camden Academy with one of the white seminarians and my co-worker, Connie Turner.

Late that night, Connie crept up the stairs and knocked on my door. I barely recognized her. She had put a black rinse in her hair and had “ratted” it into a bouffant style to look more southern, then had gone with Washington Post reporter Paul Good to the George Wallace rally. Good had put her up to a risky adventure. Good boosted her up into a pecan tree on the courthouse square where she saw and heard the whole rally. Connie was breathless with amazement at the hatred Governor Wallace whipped up in the crowd.

Wallace had the crowd in a real frenzy. They were screaming, “Kill the N—-r Lovers!” Wallace told the cheering crowd something like: “Alabama and the rest of the God-fearing South are once again at war with the United States. This time we will succeed because God is on our side. He laid down the law of black and white. It is a crime to undo God’s creation of a superior and an inferior race. Nigrahs never can and never will be equal to white men. We will fight this fraudulent legislation, this so-called voting rights act with every weapon at our disposal. Tonight I tell you my friends that if you defend our freedom and our way of life by driving out these outside agitators, you will be doing the greatest service to this county, the great state of Alabama and to future generations.” 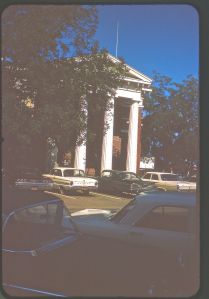 We huddled in the back and went to bed early but couldn’t sleep. That night, cars filled with our field workers were shot at as they headed to Coy to try to avoid the riled-up racists. No one was seriously injured but all were severely shaken, and two car windows were broken. If I hadn’t insisted on staying at the Academy, I would have been in one of those cars. Perhaps because the Klan thought we had all left town, no one came up to the Academy campus that night, but I still felt uneasy until Bob slipped into my bed around midnight. “Where were you?” I asked. “Don’t ask sweetheart, just be glad I’m here now. Here and alive.” He took me in his arms. – excerpted and adapted from “This Bright Light of Ours: Stories from the Voting Rights Fight” by Maria Gitin, University of Alabama Press. More: www.thisbrightlightofours.com