Wilcox County and its county seat, Camden, share a voting rights history with Selma in nearby Dallas County. As early as 1963, Bernard and Colia LaFayette organized marches in Wilcox with Black citizens demanding the right to vote. Dr. King visited the county many times on his way to and from Selma and Montgomery. Hundreds of Wilcox students and adults joined the February Childrens’ marches in Selma, and were beaten off the bridge on Bloody Sunday. Selma activists came regularly to support the Wilcox demonstrations. Charles Bonner of Selma and Bob Block from California spent a night or two in the Wilcox County jail in April. Bob got cattle prodded in one march and then signed on to work with Dan Harrell, the director of seven SCLC SCOPE project counties who was based in Wilcox.

Almost as soon as we met, Bob and I fell in love. I guess Charles wanted to keep Bob on his team so recruited me into Selma SNCC, although I continued to work with SCOPE in Wilcox County as well. We had many adventures and misadventures that summer, both together and separately. The racists were absolutely outraged at this new wave of “outside agitators” who arrived to join the “hangers on from the March,” as some snidely referred to whites who hadn’t gone back north. But Charles was thrilled to have us there and always made us feel at home in Selma. He began educating me on SNCC philosophy and tactics which seemed so cool compared to what I learned from our SCLC reverends. But I loved our “Revs” as we called most of our adult leaders. Out in the field, it took both SCLC and SNCC tactics and support just to stay alive. Charles would sometimes drive us away from (and sometimes into) danger in a powder blue SNCC Valiant. Our county project leader, Major Johns, rescued me from potential attack more than once in his ’52 Chevy.

Bob and I were seldom allowed to work together, but when we could get together, we met in Selma with Charles and his girlfriend Janet to party and to share stories. One day in July, I was with a small, integrated team canvassing for voters in a remote area outside Arlington. A couple of white men in trucks roared up and tried to run us over. They had guns, too. We spent that afternoon hiding in ditches, and running through pine forests while my local canvassing partner, Robert Powell, tried to get a call through to our project leaders to come rescue us.

Bob told us that his afternoon canvassing with Dan Harrell had been even more exciting. “Dan and I were walking along when this white guy appears out of nowhere. I mean we didn’t hear him comin’, see a truck, nothing. Just like that, he takes his pistol, raises it right to Harrell’s head and presses it against his temple.”
“You know I would kill you as soon as look at you, doncha?”
“I believe I do,” was all that Dan replied.
Read the full story: https://thislittlelight1965.wordpress.com/2010/06/15/bob-dan-the-man-with-a-gun/
Then I told Bob what happened out in Arlington, about being chased all afternoon by white men in pickups with rifles. “He must’ve been related to my guy. Dan didn’t even tell me about what happened with you!” 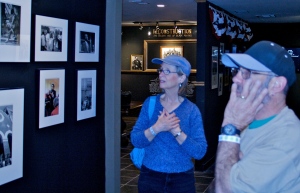 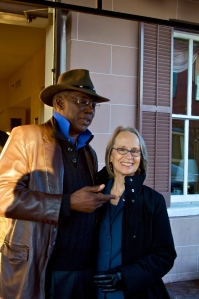 Forty years later, Charles, Bob (now Luke) and I had a reunion, with some other civil rights veterans. We swore we’d go back some day and walk over the Edmund Pettus Bridge together. In 2010, 45 years after our first meeting, we marched over that bridge with thousands of other foot soldiers in the Selma Jubilee Bridge Re-enactment Ceremony. I am so grateful that we lived to share these stories and to continue our friendship.

Excerpt and adaptation from “This Bright Light of Ours: Stories from the Voting Rights Fight” by Maria Gitin, copyright, University of Alabama Press 2014. www.thisbrightlightofours.com