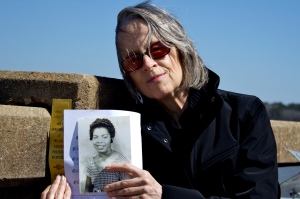 Memorializing Ethel Brooks at the Scene of her Fatal Crash

Monday evening March 1st at Historic Antioch Baptist Church, I will have the privilege of being one of the speakers at a Commemorative Mass Meeting celebrating the 45th Anniversary of a voting rights march led by Dr. Martin Luther King Jr in Camden Alabama. Because we may not have internet access, I want to share Ethel’s story now, on the eve of our departure.

Today, March 1st was a week before the march known as Bloody Sunday in Selma forty miles away. We are here to honor our comrades who are here tonight and the far too many that we lost too young.  In 1965 at age 19, I was fortunate to be one of the smallest foot soldiers in the nonviolent freedom fight in Wilcox County Al. Our SCLC SCOPE project was led by Daniel and Juanita Harrell and Major Johns with dozens of self-trained local student and adult activists supported by SNCC and SCLC. Most people know that the Spring and Summer of 1965 turned the tide for voting rights for African-Americans and changed history forever, but few people know how much of that change occurred right here in Camden.

Before I arrived in June, students had led demonstrations to the courthouse where they were met with violence, beatings, tear gas and arrest. Adults organized, demonstrated, marched from this very church. Hundreds of Wilcox County residents were on the Edmund Pettus Bridge in Selma on Bloody Sunday – many of you were injured in the attacks on the marchers. Dozens of you were at Dexter Curve when the marchers made their finally victorious entry into Montgomery three weeks later. Although that famous five-day Selma to Montgomery march ended in tragedy as it had begun  – with death, arrests and beatings – fearless freedom fighters continued on in Camden as they did in communities across The South, out of the limelight and without federal protections.

In my three months in Wilcox County, as I walked the rural red dirt roads doing voter education and registration work, ran from the Klan, was arrested and ill, organized and attended mass meetings and supported local leaders, I met dozens of people who I have never forgotten. I admired your courage and am grateful for your acceptance of a few of us white kids who shared in your struggle for a while.

Many people could and should be honored tonight but it is my duty with a heavy heart to honor someone who died too young, who should be here with us, her clear alto voice singing out the freedom songs she loved so much, my friend and hero, Ethel Lenora Brooks of Coy, daughter of Julia and Jesse Brooks and mother of Jesse Brooks Jr.

When I met Ethel she was only twenty-four years old, a very attractive single mom, who lived with her son and wonderful parents in the tiny community of Coy one of the most organized areas in the county.

Ethel organized carloads of students to participate in the Selma marches. She had been trained by SCLC and was fearless and tireless, impatient with those who were not ready to join The Movement. She always there for us, She taught me how to act, what to do and even how to sing Freedom songs with the right kind of spirit.

One day we were being chased by a truckload of the local Klan so she sped up and hid behind Harvey’s Store at the crossroads. After they passed, she pulled out and started chasing them! We were screaming at her to stop, terrified but also laughing at her courage; that’s just how she was. Outrageously brave.

She had these pants – paisley pedal pushers – they call them ‘crops’ now – that she called her jail pants. She said she could tell when we were going to be arrested, had a nose for it. Sure enough, a few days after we arrived, she was wearing her paisley pants while we were working on boycott materials at the church office and the sheriff rounded us all up and took us to the old jail.

One of my best memories is of the weekend of 4th of July out at the Brooks’ in Coy. We had fried chicken, pecan pie, strawberry wine. When the fireflies came out, Ethel and I sang “This Little Light of Mine”. The day after that we all jumped into the pool at what they then called “The Negro” playground. Yes, we integrated the pool at Bessie W. Munden Park. Later the Klan chased five carloads of us all out of town but it was worth it.

When I returned here in 2008, I was devastated to learn from Ms Kate Charley that Ethel Brooks died young in a solo car accident. I visited her grave, said a prayer and wept. It is still nearly impossible to imagine that she isn’t right here with us tonight. I never knew anyone more alive than Ethel Brooks.

I don’t know if her son Jesse is here, but I want to say to all the young people here, whatever Ethel did, it was all for the children, everything was about the future. The Movement people put our lives on the line so the terrible abuse, poverty and humiliation they and their parents endured would not have to be carried by the next generation. It is now your honor and responsibility to carry forward the work of eliminating prejudice and building a healthy, thriving community. It may not be as exciting, but it is just as important, more important right now.

There were many many leaders, both known and unknown. Thank you for giving me the honor of sharing just a few memories of my dear friend Ethel Brooks.

I want to conclude with a quote from another Coy leader, Mrs Rosetta Angion who raised 16 children and still found time to be a Movement activist.

Ethel Brooks? She carried my children over to the Selma march, the one they call Bloody Sunday. She went up to the Academy and got them all to walk out and go over there. They looked up to her.

She was a young Harriett Tubman. Whatever she told us to do, we did it. If she came by and told a few of us ‘I want you all to go walk across the Alabama River, ‘I know you can do it, ’we’d go do it.